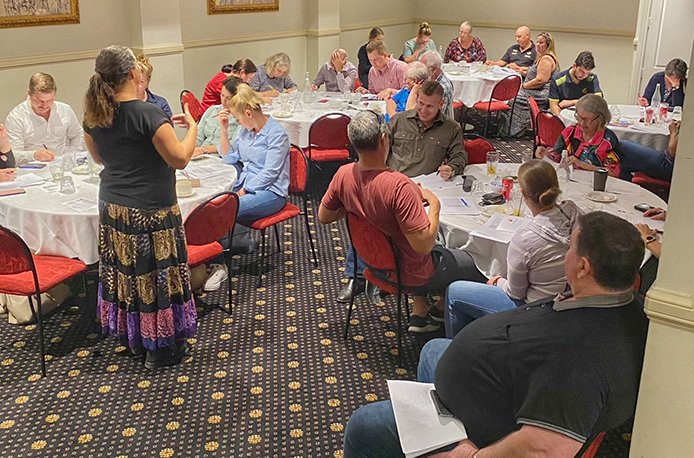 Thanks to Southern Gulf NRM, with funding from the National Landcare Program and the Rotary Club of Mount Isa South West, a staggering number of representatives from Mount Isa’s sporting, community and cultural groups were given the opportunity to attend a fully funded, hands-on, grant writing seminar aimed at assisting these groups to win funds and influence panels.

Grants and creative marketing expert, Samantha Morris of Wombat Creative, was flow across from the Gold Coast to ensure the night a clear success.

The highly engaging seminar was uniquely targeted to suit the needs of community groups that often have more hurdles to overcome when trying to access much needed funding.

Clearly a demonstration of how necessary the evening was to the community, numbers for the event were at maximum capacity with a waiting list of those eagerly trying to nab a spot! Samantha Morris was thrilled with events attendance and was moved by the passion these organisation representatives had when talking about their work in the community.

“Towns like Mount Isa would be drab and dull if it weren’t for the scores of volunteers working to support people and Country,” she said. “These community groups are the lifeblood of the Southern Gulf. I can’t imagine what life would be like here without the passion and commitment of their volunteers.”

Among the attendees were several different sporting groups, Council departments, Qld Police Service and other arts and hobbyist groups who all toasted the evenings success.

Teresa Littlemore, of Parkside United Junior Football Club, had high praise for the event. “Seeing so many members of our town here, all willing to give even more of their own volunteer time was incredible. It is fantastic that these clubs have been given the opportunity to learn how to make the most of grant writing. It’s not an easy task but Sam has certainly changed my perspective!” she said.

The evening was proudly funded by Southern Gulf NRM and The Rotary Club of Mount Isa South West, both of whom had a strong presence at the event, to give back to the community in which they reside.